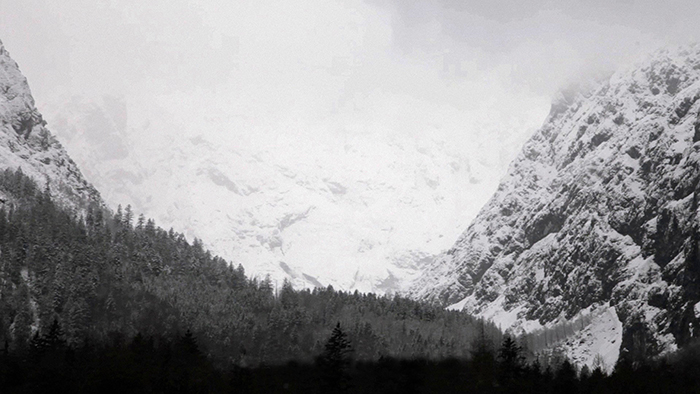 “In her solo practice, Mata Dupont has taken a turn toward intellectual history, and how the values and iniquities of European modernism express themselves in landscape… Purgatory was itself a mountain, says Dante, the third layer between a netherworld and who knows where.”
Jason Farago in the summer 2016 issue of Even (evenmagazine.com)

In Purgatory was itself a mountain, Pilar Mata Dupont (AUS/NL) shows three recent, award-winning or nominated video works made in Australia, Germany, and Switzerland. The films presented look at the mountain as a metaphor for alienation and inequity, and how history makes itself known in the present. Using allegorical adaptations of texts by Sigmund Freud, Dante Alighieri, and Thomas Mann, the works investigate group psychology and tyranny, the bureaucratese and politicisation of asylum seeker policy, and the glorification of historical wars.

Pilar Mata Dupont is an interdisciplinary artist based between Australia and the Netherlands working in video, performance, and photography. Using theatrical and cinematic methods, she investigates ideas of nationalism, identity, and mythology through the use of allegory and narrative.

In 2015, she won the Plymouth Contemporary Open in the United Kingdom, and the Wexner Center residency prize at the 19th Contemporary Art Festival Sesc_Videobrasil in São Paulo, Brazil. Her most recent solo screening, Kaiho, opened in the Rappu space at the Pori Art Museum, Finland in 2014. Other recent exhibition highlights include group shows at the Seoul Museum of Art in Seoul, Secession museum in Vienna, and with collective Hold Your Horses at the Akademie der Künste in Berlin. In collaboration with Tarryn Gill, she participated in the Sydney Biennale in 2010.

This exhibition has been assisted by the Western Australian Government through the Department of Culture and the Arts.