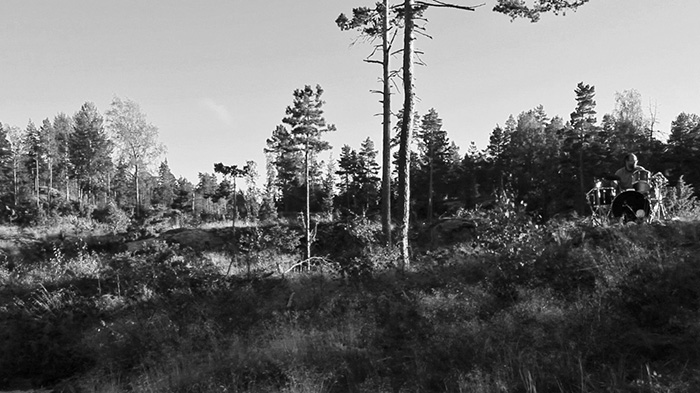 In a series of videos entitled “On C.D. Friedrich”, David Muth engages with the famous German painter and his particular approach to the depiction of landscape. In one video we are presented with a drummer sitting behind his kit who is working the drums. The scene is taking place in the Finnish woods. The framing of the shot has been chosen carefully according to the principles of pictorial compositions that were the landmark of German Romantic painting. Most importantly, the subject is entirely subsumed by the landscape, the drummer is staged in the back of the open volume and therefore becomes a compositional element that is part of the wider ensemble generated by Muth’s visual selection.

In Casper David Friedrich’s universe, nature was posited as a mirror of the soul of
individuals aiming to withdraw from the looming catastrophes of industrial alienation.
But in a state of “transcendental homelessness”, as Georg Lukacs so adamantly put it, individuals increasingly seem to lack the capacity to experience the difference between subjects and environments as aesthetically pleasing. The protagonists in Muth’s video series don’t have the experience of the “sublime”that was so important for Romanticism, and they don’t admire the landscape – instead they appear to be caught up in their own universes, circulating around the suns of their own activities.